Another of Greenville's historic neighborhoods, known today as the Colonel Elias Earle District, is closely tied to the history of the Earle family. In the late 18th century, Colonel Elias Earle, an early settler of Greenville, acquired land to the north of town. In 1834 more acreage was purchased by the Earles along what is now known as James Street. The David family, who owned the Earle Town House from the 1850s through the 1920s, named the street and gave the easement for its construction. In the early decades of the 20th century, thanks in part to the Furman Company, this area began to develop, first with James Street and then along Earle Street. Two of Greenville's oldest landmarks, both dating back to the early 19th century, are located in the district, but it was the 1910s and the 1920s that saw a dramatic growth of the area as an in-town neighborhood. 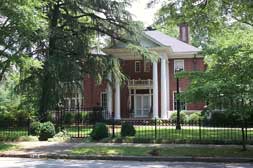 Architecturally, the district is important because it contains two of Greenville's earliest landmarks: the Earle Town House at 107 James Street, built about 1820; and "Whitehall," at 310 West Earle Street, built in 1813 as the summer residence of Governor Henry Middleton. Also of importance are many excellent examples of early 20th century historical revival styles including Neo-Classical, Dutch Colonial, Georgian Revival, English Cottage, and Tudor. The district is significant in community planning as an early automobile neighborhood. Originally part of the Colonel Elias Earle estate, the district was subdivided in the late 19th century. By the 1920s, construction was booming, with large houses being erected on large lots.

Side driveways, rear garages, and porte cocheres all helped the neighborhood accommodate the automobile. Typical of early automobile suburbs, houses were set back from the road and had large, grassy front yards. The district was named to the National Register of Historic Places in 1982, becoming Greenville's second National Register District. In 1984, the neighborhood became the second locally designated Preservation Overlay District.